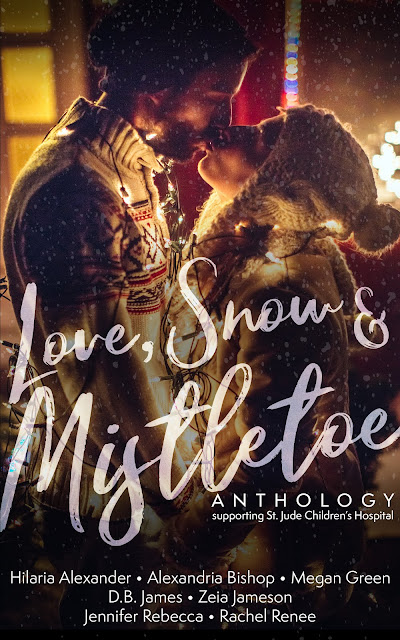 Seven of your favorite authors have come together for a holiday charity anthology!

Missing your favorite characters? Jump right back into their lives for a little Christmas fun and join your favorite beaus under the mistletoe.

have teamed up to bring you an anthology of sweet and savory tales to catch a glimpse into the worlds you've been craving more of.

A Scottish hunk, a pop punk rock star, a sweet hot cop, a smooth Southern lawyer, an Irish bad boy, a football stud, and a mysterious secret agent...winter is here and these guys all want to help keep you warm and toasty this season. 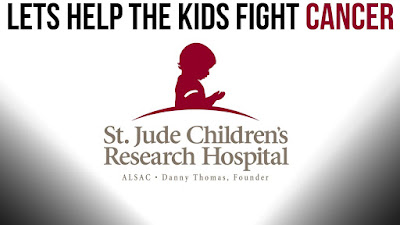 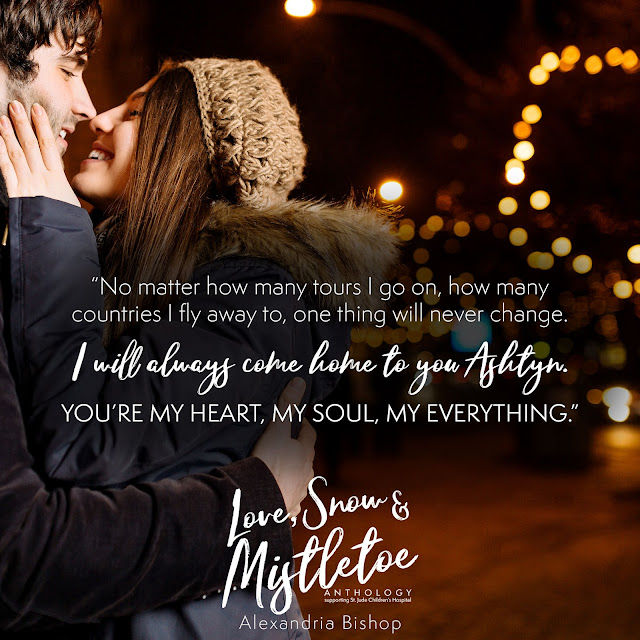 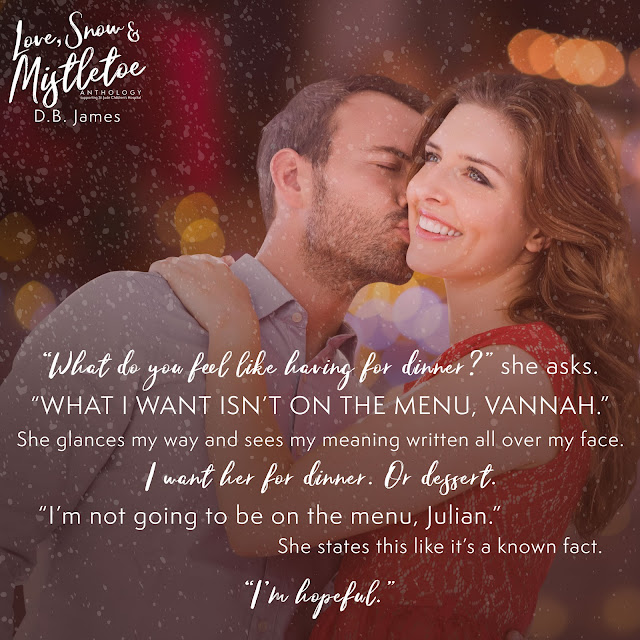 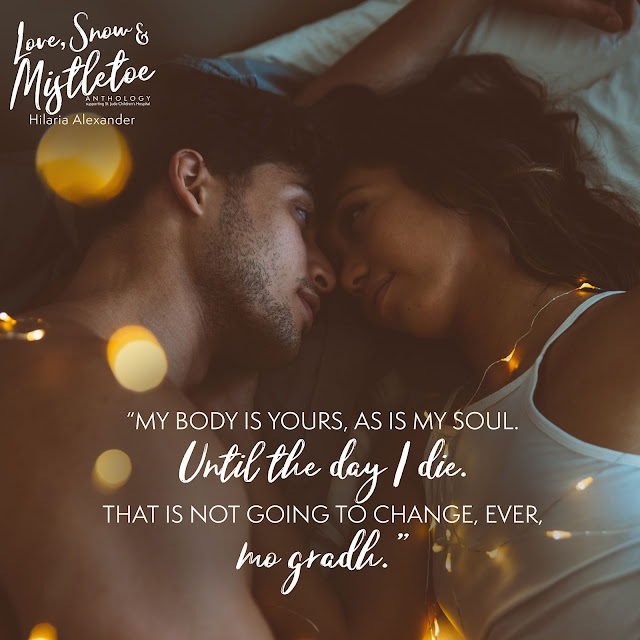 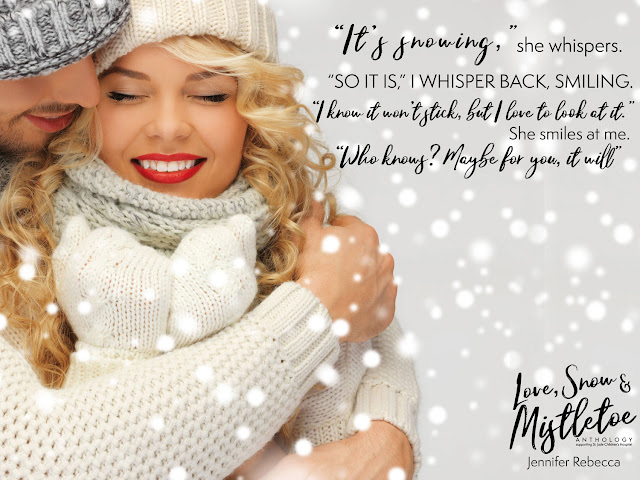 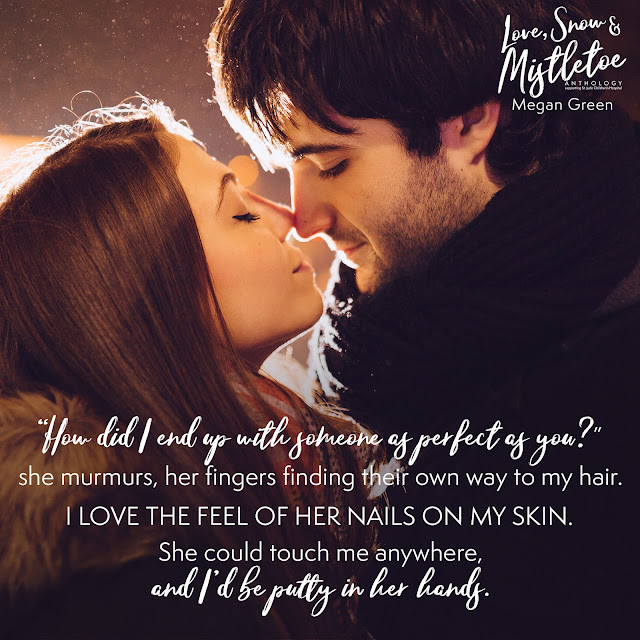 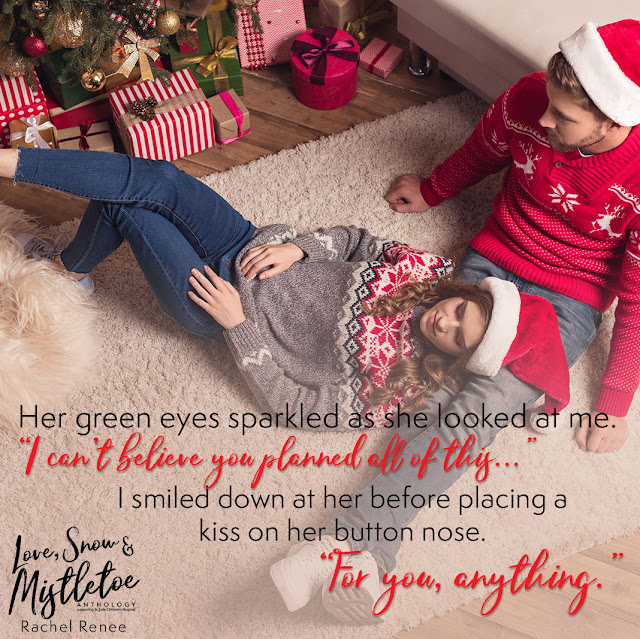 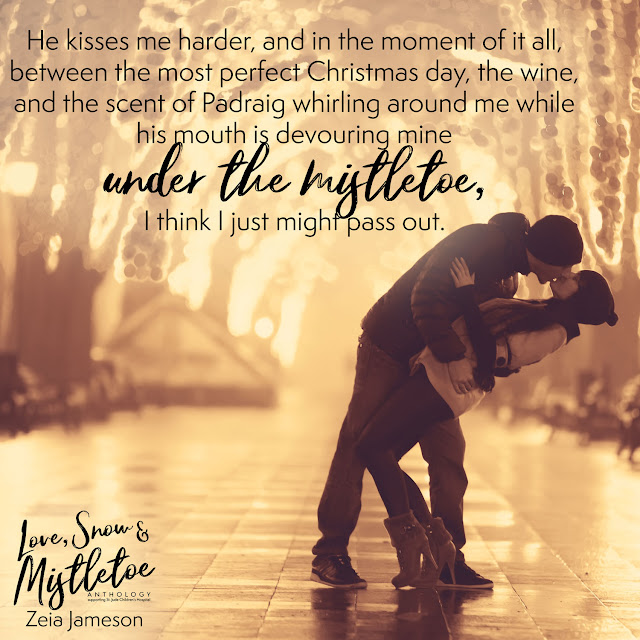 
Not me. I feel like I’m back at square one and starting all over again.
I feel...weak.


Which is why I’ve planned to spend as little time as possible in Julian’s company. Morgan promised we’d do things together as a group or just the two of us. So far, it’s been okay. Slightly awkward, but okay. I mean it’s painfully obvious to all I’m avoiding any alone time with Julian. But can you blame me? He was my husband when he slept with my sister.
She got pregnant.
I got divorced.
Not to mention eighteen years spent in this solitary hell of my own making.
But back to the moment. Right this second, I’m…scared.


You better run, Savannah.
Instead of running, I stay firmly seated on this damn flowery old lady couch while the lights from the Christmas tree twinkle in the room like starlight in the night sky. I should probably head over to my hotel soon, but I sink down deeper into the cushions, releasing a sigh as I do.
Promises may have been made. I told Morgan I’d spend this night here, only so it’d be easier for us all to celebrate Christmas morning together, but I think fleeing to the safety of my hotel is the right answer.


“Care for another glass of wine, Van?” Julian asks from where he stands on the other side of his grand living room, his bottle-green eyes still watching me like a hawk stalking its prey.
“We both know the safe answer to that is no. I’ll be on my way now. It’s past time I turn in for the evening.” Attempting to stand with as much grace as I can muster, I get tangled up in my pants while doing so. Stupid beautiful Louboutin high heels.
The touch of Julian’s hand on my elbow as he helps to steady me feels like a jolt of lightening straight to my heart. All I can manage to do is turn my gaze to his. His jewel-like eyes burn into mine.
I don’t move.
Neither does he.
It’s like this moment in time is what we’ve been waiting nearly half our lives for…a second chance.
Even though I’m stubborn as heck and will probably never let myself go enough to feel the kind of soul-bearing love I once knew in Julian’s arms. Before he betrayed me and stomped all over my heart.
A minute passes and neither one of us has tried to move, his hand still on my arm. I don’t even feel like I’m breathing. If it wasn’t for my chest moving, I’d swear I wasn’t.
Another minute goes by.
The grandfather clock strikes on the half hour; we still don’t so much as bat an eyelid.
Three minutes pass.
Now it’s become a staring contest neither one of our stubborn asses will break.
His tongue darts out to lick his lips.
His lips always were my downfall.
By the fourth minute I’m telling myself if I see him move one more muscle I’m declaring victory as mine and leaving. The bathtub in my hotel room is calling my name. It sounds like a delicious idea to me.
Minute five is here.
He hasn’t moved anything but his tongue.
Suddenly, he reaches his hand out toward my face, his thumb rubbing my cheek near my lower lip. My tongue nearly darts out to lick it, but if I did it’d be a game changer. One I’m not sure I’m ready for.
“You had a droplet of wine. Here, let me take better care of it.”
Before I can protest, his lips come crashing down on mine. Using both of his hands, he shoves them into my hair, threading his fingers through and holding my head in his steady hands. He’s using them to angle my head and hold me hostage. He doesn’t need them though. As soon as his lips dusted mine, I was ready and eager to kiss him back with just as much fervor.
How I’ve missed kissing Julian.
My tongue licks along his bottom lip, begging for access. I want to taste him again. I want to burn for him like I used to for days after a simple kiss. When his tongue meets mine, I hear his responding growl.
The sound is what breaks this momentary insanity.
Breaking the kiss, I push gently at his chest and take two steps back.
“W-We can’t, Julian. It’s too much.” My voice doesn’t sound like my own. The one coming from me in this moment belongs to the Savannah whose heart was shattered. Whose soul was ripped from her body. I’d recognize her voice anywhere. But it’s the Savannah I am now who needs to finish this. “I’m saying no, Julian. No means no. Never again. Now if you’ll excuse me, I have a hotel room to get back to.” 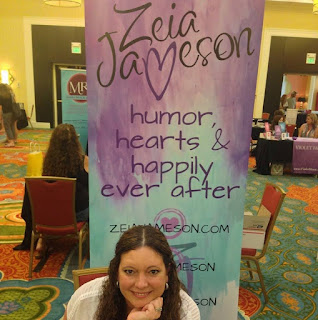 Zeia Jameson's passion for writing compels her to get into the zone and type until her fingers go numb. When not submerged within her own stories, she enjoys curling up in her large reading chair, snuggling underneath a blanket, and feeding her addictions of coffee and reading. She is fond of humor and laughter and believes these are elements that keep the world sane and spinning.
Zeia lives in Georgia with her husband and daughter, where they spend most of their time exploring recipes, binging on Netflix, drawing chalk-art on sidewalks, and avoiding pollen at all costs.

Hilaria Alexander was born and raised in the south of Italy, where her family still lives. She was bit by the travel bug early on and lived in Tokyo and Orlando for a while before settling down in Oklahoma City with her husband and kids.
She loves books - obviously - as well as movies and TV, and is addicted to award shows. She can't play an instrument to save her life, but she loves music, which is one of her biggest inspirations when plotting new stories. If you have questions about her or her books, ask her on Facebook and Twitter, or email her at hilaria_alexander@outlook.com. 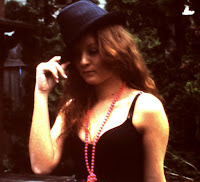 Born in a small southeastern island in Alaska, Alexandria moved to southern Oregon early on in her life. Where she still resides with her young daughter, husband, and fur baby.
She's insanely obsessed with fashion and used to dream of becoming a fashion designer creating new outfits for her Barbie's with her childhood best friend. For now she's loving writing and fulfilling her fashion addiction with shopping.
Along with fashion, Alexandria is a big lover of music. She's always listening to something while writing and creates a playlist to go along with each book she writes. She's always on the hunt for new music and loves getting suggestions from her readers.
Alexandria spends way too much time on social media and would love for you to say hi! 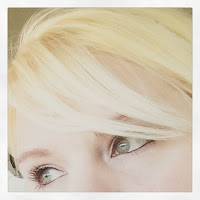 D.B. James is an indie author of New Adult Romance. Her debut novel will release on August 19, 2016. In her spare time she's an avid reader. Colleen Hoover, Tarryn Fisher, Teagan Hunter, KA Tucker, Linda Kage, Renee Carlino, and Abbi Glines are a few of her obsessions. She's a Michigan girl through and through but currently resides in sunny Florida. Sarcasm, Supernatural (team Sam!), Harry Potter and coffee are among her favorite things. 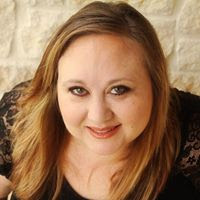 Jennifer is a thirty-something lover of words, all words: the written, the spoken, the sung (even poorly), the sweet, the funny, and even the four-letter variety. She is a native of San Diego, California where she grew up reading the Brownings and Rebecca with her mother and Clifford and the Dog who Glowed in the Dark with her dad, much to her mother’s dismay.
Jennifer is a graduate of California State University San Marcos where she studied Criminology and Justice Studies. She is also an Alpha Xi Delta.
10 years ago, she was swept off her feet by her very own sailor. Today, they are happily married and the parents of an 8-year-old and 7-year-old twins. She can often be found in East Texas on the soccer fields, drawing with her children, or reading. Jennifer is convinced that if she puts her Fitbit on one of the dogs, she might finally make her step goals. She loves a great romance, an alpha hero, and lots and lots of laughter. 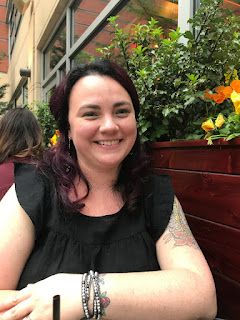 Rachel Renee, born and raised in and around Cincinnati, Ohio, finds herself residing with her family in the suburb of Loveland. After completing a degree in psychology and racking up thousands of dollars in debt, she decided to become a stay at home mom and homeschool her children, all the while working on her writing career. While she is not using her degree in the secular world she uses it on a daily basis, psychoanalyzing her husband of 13 years and two children (9 and 7), her 2 dogs, 3 cats and her life as a writer and teacher. Just like Rachel enjoys reading books from many different genres, she also enjoys writing different genres as well, her first release being a contemporary romance and her second is the start of a detective/murder mystery, thriller series.
Stay tuned as Rachel continues her journey! 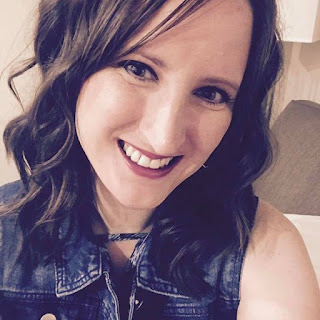 Megan lives in Northern Utah with her handsome hubby, Adam. When not writing, chances are you’ll find her curled up with her Kindle. Besides reading and writing, she loves movies, animals, chocolate, and coffee. Lots and lots of coffee. She loves hearing from readers, so drop her a line! 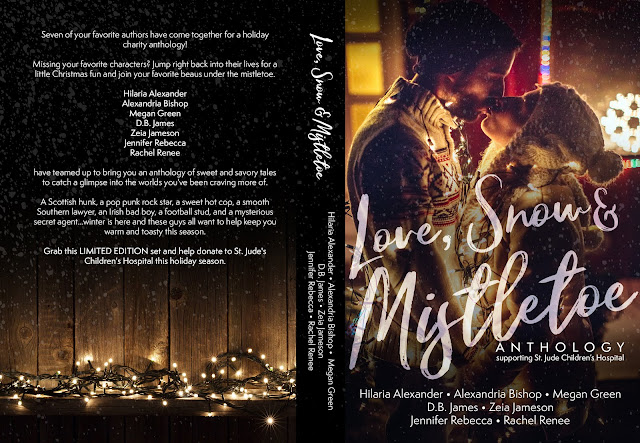