Hey, I just met you,


And this is crazy,


But you’re my mate,


So please have my baby.

Werewolf Brock Newcastle’s biological clock is ticking, and his inner wolf is howling. He wants pups, and he wants them now. The problem is, no matter how hard or how long he’s been looking, he hasn’t been able to find his mate. He’s almost out of hope … until the night he finally meets her.
Autumn Gray is part of the notorious gray coven of witches. She has been trained since birth to be the next head witch, and duty comes before all else. That means she will have to enter a marriage of convenience to a stranger—a powerful warlock. But one trip to the nightclub Hot Fur is enough to throw those plans out the window. Because suddenly, she has a six-foot wall of sexy werewolf wanting to claim her as his mate, and she’s very, very tempted to say yes.
What’s a witch to do? Choose her coven or love? 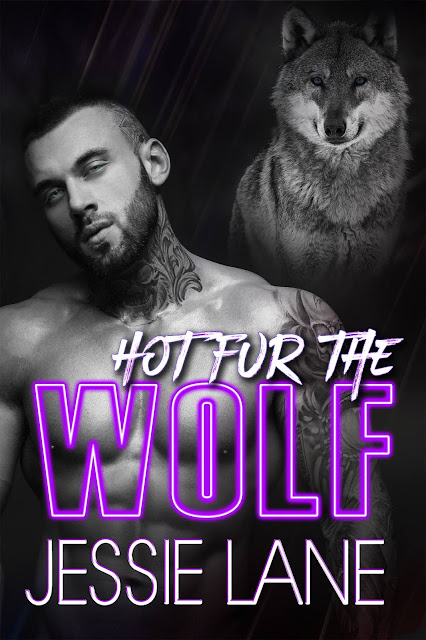 
Brock ground his teeth while staring at the small human woman in front of his counter.


Remember to be nice to the customers, he told himself, and his inner wolf, for what felt like the hundredth time that week.


Placing his hands on the glass display counter, he tried to appear as nonthreatening as possible. “Ma’am, it’s a tattoo, not a massage. Of course it’s going to hurt.”


The blonde bit her bottom lip with uncertainty as she stared down at the design she had picked out. “Hey, I’ve had a deep tissue massage—that hurt. So, I can take some pain, but, like, how bad will it hurt? Really bad?”


Losing his patience after dealing with this same woman for over two hours, he finally snapped, “Well, it’s not going to feel like rose petals across your skin, lady. You’re talking about a needle penetrating your skin thousands of times over a period of hours. It’s going to hurt like hell.”


When a throat cleared from behind him, Brock almost hugged the person who had interrupted, giving him a reprieve.

Turning his head, he looked at his only employee, Jimmy, who didn’t waste any time saying, “You got a phone call on line one, man.”


Brock knew damn well he didn’t have a phone call. With his sensitive shifter hearing, he would have heard the phone ringing from the back office. Jimmy was giving him an out to get away from this customer, and he sure as hell was going to take it.


Looking back to the customer in front of him, he politely excused himself, then retreated to the office at the back of the shop. He sighed in relief as he walked into the small room with a desk, a computer, a filing cabinet, and some of his original art on the walls.


It wasn’t easy being the owner of a tattoo studio, but he loved every minute of it. The customers usually didn’t get on his nerves the way this one had, and that was probably why Jimmy had intervened.


Brock knew what his problem was the moment he sat down at his desk. He needed relief. It was a full moon and his wolf was riding him hard. Unfortunately, his human half was tired of meaningless hookups.


His heart squeezed as he stared at the picture of his sister and her family. He wanted what his sister had—a mate and pups. At almost forty fucking years old, he was tired of spending his nights by himself. His old pack, who were halfway across the country where his sister still lived with her family, had been sad to see him go, but they understood his need to look for his mate.


Just the thought of having a houseful of kids and the woman who would give that to him made him yearn to run out of the shop and continue looking. Looking for her wasn’t the problem, though.


In his endeavor, he had moved to ten cities and had yet to find her with any of the wolf packs. He was starting to become desperate, wondering if he would ever find her. Not to mention restarting his tattoo studio in every town was a pain in the ass. He looked forward to the day he wouldn’t have to close a shop and move again.


What worried him most of all was time. As in, he was running out. Despite the human’s crazy beliefs, shifters didn’t live forever. They had normal life spans that lasted anywhere from fifty to ninety years. With his age, he was quickly losing time to find his mate and start having those pups he so desperately wanted. Brock worried he would never get his dream family.


Lost in thought, he didn’t hear Jimmy come back to his office.


Jimmy was a wolf from the pack here in Louisville, Kentucky. The two of them worked well together. By watching them, one might think they had known each other for much longer than the few months they had been in each other’s company.


Brock knew he was lucky to have found a friend in Jimmy. It wasn’t the only thing he had been lucky about since moving to Louisville.


The alpha here had graciously let Brock move into the territory and set up his tattoo studio. Not all alphas were that kind. Some didn’t want stray wolves around their pack, preferring to be more secular. However, the Louisville pack had welcomed him with open arms and wished him the best while he looked for his mate.


Most wolves couldn’t handle being without a pack, but to Brock, finding his mate was more important than having a pack to call his own.


He was grateful that the Louisville pack was willing to let him stay in the area and search, but he dreaded having to move to a new pack’s area to keep looking. The Louisville pack had practically adopted him. Plus, it was nice to have Jimmy and some of the other wolves around so he wasn’t so damn lonely all the time. Jimmy’s sister Raven stopped by the tattoo studio on a regular basis and it sort of filled the hole of not having his own sister around.


Looking at the other wolf, Brock acknowledged for the first time since he had started to look for his mate that, if he had to leave this area, he would miss the pack almost as much as he missed his sister. Louisville had started to become home, which made his search for his mate here all that more desperate. He didn’t want to leave the one place that had started to feel like his, along with the pack that had welcomed him into their fold. He sure as hell hadn’t felt at home at any of the other towns he had visited, nor had those packs been all that welcoming.


It felt like too much was on the line. His nerves were strung tight, ready to pop and go off with just the smallest wrong move.


Brock shook his head. “Sorry I’m being such an asshole today. It’s the moon, you know?”


Jimmy nodded, knowing exactly what he meant. The full moon brought their beasts closer to the surface. The animal wanted to run free, hunt, and be wild. If only Brock could find the woman he was meant to be wild with, then maybe he would stop feeling so restless.


“You want to go out with me tonight?” Jimmy asked.


Rolling his head around on his shoulders, Brock tried to loosen his tense muscles. “Where are you going? Out for a run?” Brock knew the Louisville pack had hundreds of acres outside the city limits. They did pack runs every month and had invited him to come along if he felt the need to cut loose with his wolf.


Jimmy shook his head. “No, I was actually going to go to Hot Fur.”


Brock gave Jimmy an irritated stare. “You want to take me to a fucking club? Are you out of your mind? In the state I’m in, I’ll end up killing the first asshole who pisses me off.”


Jimmy laughed. “Or, you could do something else with all that pent-up energy, like fuck. I’ve been trying to get you to go to this club for a reason, man. It’s a shifter-friendly place, no humans allowed. It’s not just some regular club.”


Brock’s interest was piqued. “What kind of fucking club is it, then?”


“It’s a shifter’s dream, bro. Most of the women are looking to hook up. And if that doesn’t cover your needs, there’s a fighting ring in the basement. Fucking or fighting, one way or another, you’ll get rid of all that restless energy you got rolling off you. Not to mention you never know, maybe you’ll find your mate there.”


Brock snorted. The chances of him finding his mate at the very club Jimmy had been trying to talk him into going to for months would be astronomical. He didn’t like the idea of hooking up with some random female for the night … but the fighting ring sounded like something that might help.


He had been here for four months, and in that time, he had been looking for his mate in what had to be all the wrong places—pack lands, human hotspots like the mall. Hell, he had even gone to a few human clubs and bars, knowing that some shifters liked to mingle in those areas. Between checking out those spots, spending much of his free time on pack lands, and running his business, he had not once gone to the club that Jimmy kept recommending. What did he have to lose?


Jimmy had a point. He needed to do something with all this restless energy before he scared all their customers away.

Jessie Lane is a best-selling author of Paranormal and Contemporary Romance, as well as, Upper YA Paranormal Romance/Fantasy.


She lives in Kentucky with her two little Rock Chicks in-the-making and her over protective alpha husband that she’s pretty sure is a latent grizzly bear shifter. She has a passionate love for reading and writing naughty romance, cliff hanging suspense, and out-of-this-world characters that demand your attention, or threaten to slap you around until you do pay attention to them.
She’s also a proud member of the Romance Writers of America (RWA).