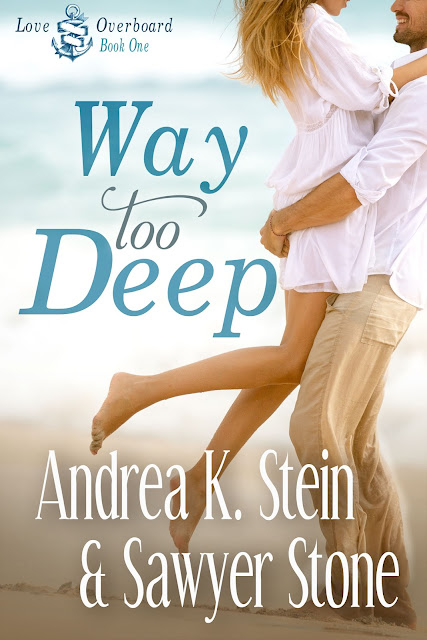 Captain Lindsay Fisher has committed the unthinkable in the tight little world of superyachting. She's lost not one but two ships under her command. She takes chances, she’s a little too abrasive, and, oh yeah, she’s taken swearing like a sailor to a whole new level.

Celebrity Chef Alton Maura earned the acclaimed “Kitchen God” title and basked in the international limelight for years until his affairs with his kitchen staff landed him twice in a poisonous stew.

When Lindsay and Alton are thrown together on an uneasy cruise through the Grenadines, sparks fly. She doesn’t like his shoes or his attitude. He can’t believe a woman who looks that good in a captain’s uniform can be such a hard ass. This is their last chance to prove themselves, but the worst thing you can do when trying to save your career is to fall in love…WAY TOO DEEP. 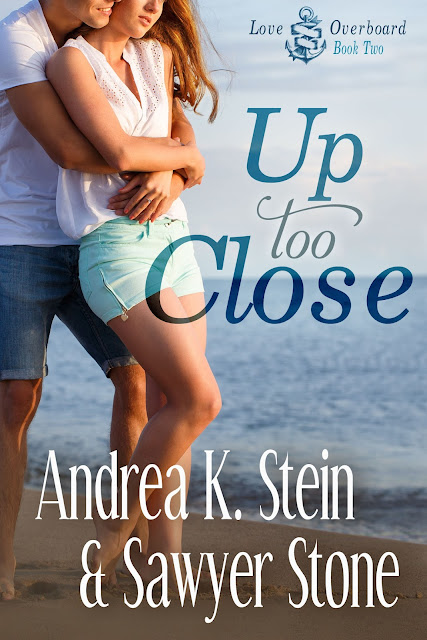 CeCe Ahlstrom, massage therapist to the rich and famous, is done with men. Her last rich boyfriend tried to kill her on an ill-fated cruise through the Grenadines. Now she’s determined to get on with her life but can’t find the funds to get to her next spa gig in Portugal.

Then along comes notorious womanizer Captain Rene Baudouin. He’s hell on the hearts of women, he can handle any storm at sea, yet he might have met his match in a leaky old boat. He needs a first mate crazy enough to help crew the wreck knows as the Tourbillon across the Atlantic.

Destiny draws CeCe And Rene together, but things are not what they seem. Rene struggles with a family secret that could destroy his future and CeCe will have to face a truth not even she knows yet.

Out on the open sea, Rene and CeCe soon find themselves…UP TOO CLOSE. 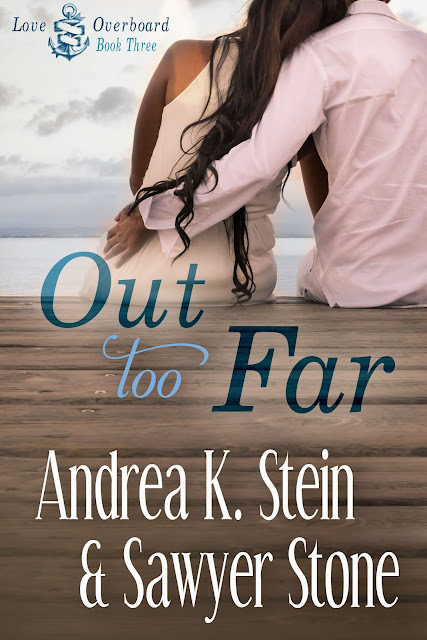 Rania Elsaeid is the brilliant engineer aboard the 115-foot yacht, the Bonnie Blue. She’s also a deadly, well-trained security guard. She keeps her cool when everything around her heats up.

Morris “Moj” Johnston, internationally famous music producer, is on a much-needed vacation cruise through the islands of the Indian Ocean. He’s not looking for love but trying to heal a broken heart.

When Moj meets Rania, everything changes. Suddenly they find themselves on the run from pirates, lost on a deserted island, and dangerously close to going…OUT TOO FAR.

Captain Lindsay Fisher jolted awake to thundering pain centered over a golfball-sized knot on the right side of her forehead. Hot, sticky blood trickled from a gash on her scalp.

The cabin lights were out, but in the gloom she could hear the roar of seawater cascading along the floor of her starboard aft cabin. She’d fallen into her bunk a few hours before encased in foul weather gear -- and a life jacket.

The ship was in a severe list. Dazed and still barefooted, she used handholds to make her way to the main saloon. The dim glow from the overhead deck bevels illuminated water pouring through the galley from the forward cabin. Shit. The custom glass top over the owner’s cabin had shattered.

The sixty-four-foot Hallberg-Rassy must have done a full roll. Lindsay had been asleep on the floor of her cabin and had probably smacked her head sometime during the spin.

They were sinking. Fast. And her first mate, her uncle Tommy, had been on watch at the helm.

She ignored the stuttering of her heart and snatched the ditch bag carabineer, clipped to the galley counter rail. She nearly collided with her second crewman in a race to the top deck.

“Jim, deploy the life raft. Now.” she shouted, shoving the bag at him.

“Got it,” he yelled, and pounded up the companionway ahead of her.

She hauled herself up, two steps at a time, and called out, “Tommy.” She didn’t wait for an answer but hit the top deck running.

The wreckage above sickened her. Anything not tied down was gone. The rigging still stood, but the sails were soaked, twisted and ripped. The top quarter of the mast had broken off.

A late, fierce storm, at least Force 11, was kicking up monster size waves, and sixty-knot winds whipped the surface water into a roiling mist. Airborne spray and foam narrowed visibility to nearly zero.

The earlier weather faxes she’d checked had shown the storm passing west of them. Mother Ocean must have changed her mind.

Tommy. I have to get to him.

Lindsay exhaled hard at the sight of the lifeboat valise still lashed to the safety rail. Her third crewman Jim worked at the straps to free the big rubber inflatable, the only thing between them and the frigid North Atlantic waters.

When the huge raft was prepped, he would splash the lifeboat into the savage waves battering the broken yacht. He’d already attached the raft’s painter to the ship to keep it from blowing overboard. When the ship sank, the emergency tether would break free.

The steep tilt of the deck meant she had only minutes to call for help and find her first mate before the yacht plummeted to the bottom of the sea.

She punched the DSC button on the waterproof radio strapped on her chest to broadcast their GPS coordinates. Then she pushed transmit and spoke calmly.

She waited a minute and repeated the plea while crossing to the wheel where Tommy should be.

They were still less than two hundred miles out of the English Channel. If she didn’t get a response soon from the Brits, she hoped another nearby ship listening to Channel 16 would relay her call for help.

When she reached the stern behind the wheel, the only sign of Tommy was a taut portion of his six-foot safety tether. Lindsay squinted through the spray peppering her face like needles. The strap wound down the backside of the wallowing yacht and disappeared into the black waves.

There was still tension on the line. She heaved up on the tether, but the weight on the other end wouldn’t budge. She didn’t dare divert Jim from getting the life raft ready.

Lindsay heaved again on the strap, this time using her whole body weight but lost her grip when her bare feet slipped on the wave-soaked deck. No dice.

She stood for a moment, scanned the waves around the ship, and then plunged into the cold seawater. The towering waves pounded her senseless like a mass of ice mallets pelting her back. Breathe. Focus.

The roll had knocked out their running lights, and the water below the surface was as black as an oil slick. She clutched her lifeline, still clipped to the ship’s jack line, with one hand while groping along the hull beneath the waves searching for Tommy. She swept a 180-degree arc before realizing his tether was stuck on a piece of the swim ladder twisted during the yacht’s violent revolution. Dammit.

The tension on the end of the line wasn’t Tommy.

She unclipped her safety line and left her life jacket on the ladder to begin a frantic free swim along the keel beneath the hull. The creaks and whines of the straining ship shrieked in her ears. Not much time left.

Lindsay resurfaced, gasped in a few breaths, and dived again to the bottom of the keel. Huge thrashing waves exacerbated the wallowing motion of the ship, and the black water threatened to suck her into the claustrophobic darkness.

Her hands and feet were numb, and she wanted nothing more than to close her eyes and let the frigid water take her.

No. She wouldn’t give in to the cold, but she was out of options. One more dive was all her body had left.

She was all in, no backup plan. In a flash, something brushed against her hand. A fish? Not bloody likely this close to the surface in a storm.

She made a wild grab and grasped a sleeve of her uncle’s foul weather gear. His life vest must have hooked onto a protruding piece of a sensor on the keel during the roll.

She pulled with her last surge of strength, and his body broke free. Kicking them both to the surface, she hung on to his life vest and gave silent thanks for her barefoot state. Sea boots would have filled and pulled her down.

The doomed yacht’s loud groans and creaks filled the air when she came up, gulping breaths. They were out of time.

But there, the big yellow raft bobbed in the water, surrounded by the wake of the sinking ship.

Jim’s face in the low light was grim, the most beautiful sight she’d ever seen. He’d found them with the battery-operated spotlight. The EPIRB’s beacon flashed behind him as he thrashed through the waves. He grasped Tommy by his jacket and pulled him aboard, then extended a hand to Lindsay.

Once inside the small canopied raft, she rolled her uncle to his back and leaned over his chest, listening for breathing. The screaming winds and rain pelting the raft’s rubber top made hearing next to impossible.

Her frozen fingers were useless. She couldn’t use them to detect a pulse, so instead she looked for a rise in his chest. Nothing. She started compressions and after only two or three, Tommy jerked to life and slapped her hands away.

“You tryin’ to kill me or what?” He took the bucket Jim shoved toward him, and in a matter of seconds, puked up seawater. “Son of a--.”

“He’s back,” Lindsay said, her voice ragged with relief and exhaustion. Painful needles of feeling returned to her fingers and toes. She collapsed onto the inflated rubber floor and stared at the peaked roof.

Her career was over.

Up Too Close (Lover Overboard Book 2)

Out Too Far (Lover Overboard Book 3) 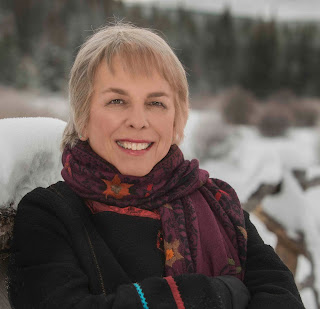 Andrea K. Stein’s daddy was a trucker, her momma was an artist, and she's a scribbler. The stories just spilled out—the pony escaped, the window magically shattered. Not her fault. Twenty years as a journalist couldn't stifle the yarns. Yacht delivery up and down the Caribbean only increased the flow. Now those tales celebrate romance on the high seas. As a sailing captain and instructor since 1996, she's logged nearly 30,000 miles to destinations around the world. She now lives in the Rocky Mountains and is the author of four historical sailing romances available on Amazon.com. 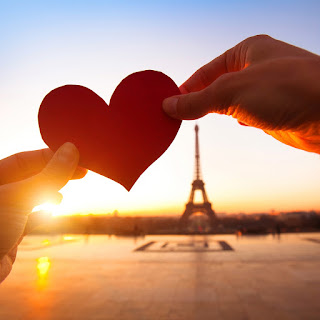 BIO:
Sawyer Stone grew up dreaming of far-off cities and far-flung continents even though those exotic locations seemed way out of reach. But the dreams of travel and love never left. It wasn’t long before Sawyer walked the alleys of Istanbul, watched the sunsets from the island of Santorini, trekked the Himalayas, and dove through shipwrecks in the Andaman Sea. Now, while still traveling, Sawyer writes all kinds of books under all kinds of names. The world needs more stories about quirky characters falling in love.