*** This book is intended for those 18 years or older due to strong, mature, sexual content that is dark at times. *** "Since when are bikers the good guys?... They're filthy as SIN." Dawson McCade is used to having to fight for everything. He fought hard for his position as the President of one of the most ruthless, bad-ass, outlaw motorcycle clubs... the Riverdale chapter of the SLAYERS, MC. He's prepared to fight with everything he has against the newest threat to his organization... the Conquistadors drug cartel as it begins to move in on his club's territory. One thing he's not used to fighting, though, is against himself. Ever since the moment he first laid eyes on the innocent, angelic, Molly Donovan, his world's been thrown upside down. He's a killer, an animal, with dark demons buried deep. Demons that he's used to help fuel the drive that's gotten him to where he is in life. He's not looking for redemption, he's not looking for temptation... hell, he IS the temptation. Molly, his "angel", brings a whole new threat to Dawson's life. One that can't be fought on the outside like everything else he's used to. She's going to cause a war within him, one that's more dangerous and terrifying to him than the bullets that the Conquistadors are sending his way. The Slayers MC are soldiers, fighters. Dawson's going to need every single bit of those things to lead both his club and his heart to victory. *This is a BRAND NEW series by Tara Oakes, authoress of the Kingsmen MC series. Although the two series will have slight overlap, this series is fully written to be read as a complete standalone from the Kingsmen. For those of you that have already fallen in love will Tara's sexy bikers, fear not... you're about to get a whole new group of alpha book-boyfriends to add to your collection.

You can add First Ride on Goodreads
here:
https://www.goodreads.com/book/show/26094430-first-ride?
from_search=true&search_version=service

Make sure to buy your copy today!
Amazon: http://goo.gl/8KYbdo

“I’ve got to come back home to my girls. They need me.”

I’m an MC whore, I will admit it. When I see an MC book, I jump on. When I see an MC book by Tara Oakes, I put all else aside so I can jump right in. Some authors have a gift for storytelling and some don’t, Ms. Oakes is definitely one of the gifted ones. She takes these men and who should be viewed as criminals and should be scary, but this author makes me love them; makes me wish I were the female character. I absolutely LOVE this author and this book. I could scream with the way she ended the story, very mean Ms. Oakes, very mean and February is way too long! I give this book 5 stars with 4.5 hands down the pants. OMG Dawson McCade, I want you!!! 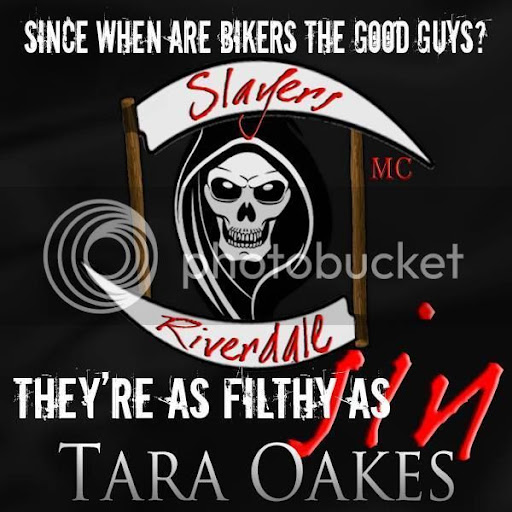 Tara is a thirty something newbie author from Long Island, New York. She's a voracious reader, a passionate writer and obsessive junk T.V. aficionado. When she's not doing one of those three things she is attempting to garden, hanging with her hubby or partaking in some retail therapy. She enjoys connecting with her readers and is having a blast entering into this new world of publishing. Her series’ include the Kingsmen MC Series, The Chianti Kisses Series, The Badge Boys Series and the newly begun Slayers MC Series!