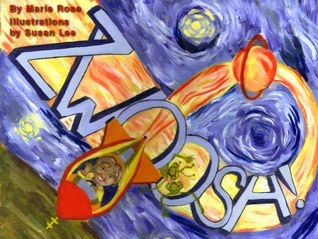 Fly to the stars in your very own rocket ship. Wave at the mean, green Martians. Picnic with Moon Men. Play tag with the comets. Win a blue ribbon space race. Just before your bedtime. Inspired by the palette of Vincent van Gogh, let’s go on a colorful space journey as we explore the colors and planets in our solar system through the power and wonder of a child’s whimsical imagination.
This is a 34 page book for young children.

https://www.goodreads.com/book/show/23008366-zwoosh?ac=1
Indie Rose Books for Kids (www.indierosebooksforkids.com) has released an iOS interactive storybook iPad app of Marie Rose's CLEL-nominated children's picture book, ZWOOSH!
The new app is a fun, imaginative companion for the ZWOOSH! Kindle, paperback, and Audible editions of the story (all 5 star reviews on Amazon, Audible, and GoodReads).
You and your little space cadets will be "Go" for bedtime or playtime as you enjoy the charming interactive animations and sound effects inside each traditionally painted, oil-on-canvas page illustrated by Susan Lee of Art On Its Side.
The tale is narrated page by page by Marie Rose with the original background score, "Rocketman Rhapsody" composed and performed by Chris Chamberlain.
Zwoosh! iPad app trailer:
https://www.youtube.com/watch?v=xppHhHxvO8A
iPad app for Zwoosh! (interactive storybook app - iPad 4, iOS 8.0 and above)
https://itunes.apple.com/us/app/zwoosh!/id982407964?mt=
Zwoosh! book trailer:
https://www.youtube.com/watch?v=stUzowELqEc
Zwoosh! on Amazon & Audible
http://www.amazon.com/ZWOOSH-Marie-Rose-ebook/dp/B00MV5UPE8/ref=tmm_kin_swatch_0?_encoding=UTF8&
Zwoosh! on Amazon & Audible in Spanish:
http://www.amazon.com/ZWOOSH-Spanish-Edition/dp/B00R1P2YYW/ref=tmm_aud_swatch_0?_encoding=UTF8&qid=1442425451&sr=1-1

Marie Rose holds a Master of Arts degree in Theater from The University of Texas at El Paso. She's taught children's theater, is published in children's and women's literature, and is a commercial voice over artist who specializes in audiobook narration. Marie is the owner of Indie Rose Books for Kids. When she’s not busy daydreaming about the places a child’s imagination can go Marie is also an award-winning screenwriter, director, and film producer in Los Angeles, California.