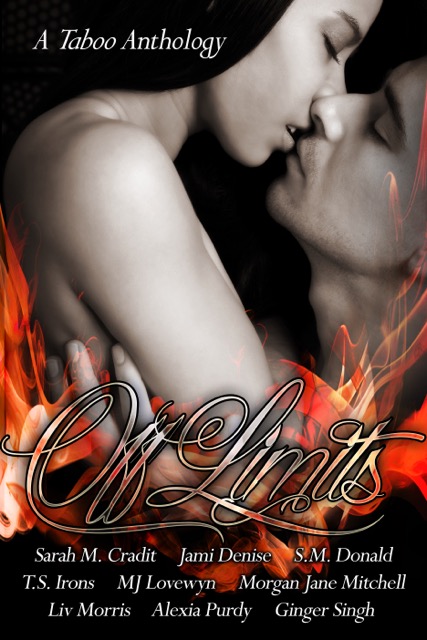 “Off Limits - A Taboo Anthology” ~ Nine, titillating tales by today’s hottest authors in one salacious anthology.
Nine naughty authors, including New York Times, USA Today and Amazon Best Sellers, in one amazing anthology. Off Limits includes two never-before-released novels.
“Off Limits - A Taboo Anthology” includes the following books:
Sarah M. Cradit, St. Charles at Dusk - Set amidst the lush and vibrant backdrop of New Orleans, this is the story of Oz and Adrienne. Of forbidden love, and startling heartbreak.
Jami Denise, Temptation - Dara Perry is having a very dry spell. Getting stood up on Valentine's Day accentuates how pathetic her life has become. That is, until she spots her very sexy boss sitting across the bar from her, and he promises to turn her bad luck into a very good night.
S.M. Donald, A Taboo Lesson - Chrissy never thought she would get caught snooping through people's computers and seeing their most intimate files, while working as a housekeeper at an expensive hotel. The man who caught her was someone from her past, but hadn't seen in ten years. She never thought that he would punish her so severely and love it.
T.S. Irons, My Wicked Stepsister - I’ve been her protector, her rock, her savior. I also happened to be her stepbrother, and completely infatuated with her. Should I push aside my feelings of desire or cross a line I’m not sure either one of us can come back from?
Morgan Jane Mitchell, In Too Deep - Taking what she wants from a new man every night lands Loraine in the local sex addict's support group where she sees a familiar face. After learning all her secrets, Loraine’s new boss Rick is determined to fix her with his own brand of therapy.
MJ Lovewyn, Between Lines (New Release) - High School Algebra Teacher, Alex Pink turns his life upside down to reunite with his summer fling only to find the woman of his dreams sitting in the third row of his class. Sometimes the worst line to cross is the one you don’t realize you already have.
Liv Morris, Love Lessons - Desperate to find a teaching job after graduating college, Tali Tillman returns to her high school to teach English Literature. One of her students and star quarterback, Daniel Johnson, begins to fail her class, so Tali's asked to tutor him after-hours. Lines between teacher and student become blurred, but will they be crossed?
Alexia Purdy, Volatile Confessions - When brothers Grant and Thomas Sully return into Hannah’s life, she knows this sinister road is full of hidden motives and forgotten lies. The brothers’ demands risk her losing everything to keep her skeletons locked away, but doing so could mean letting go of all she’s ever wanted.
Ginger Singh, The Billionaire’s Stepdaughter (New Release) - Everett isn't used to not getting what she wants. When what she wants is her mother's husband there is nothing a little tit for tat won't get her. 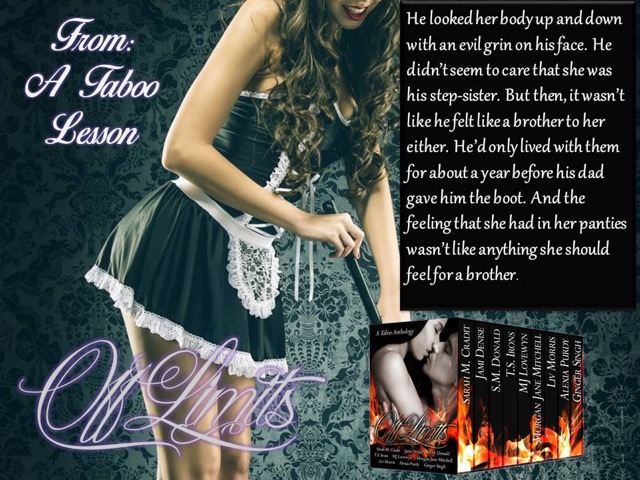 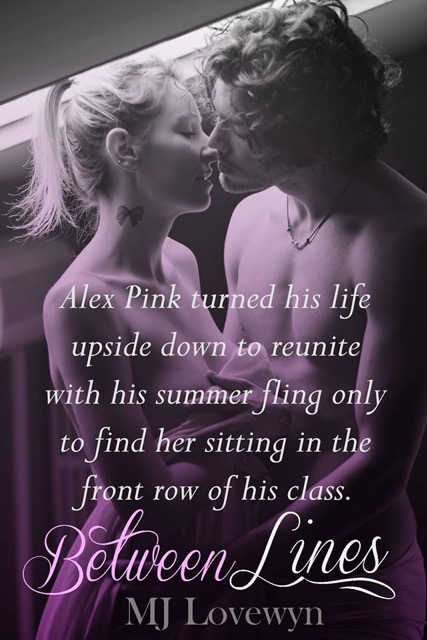 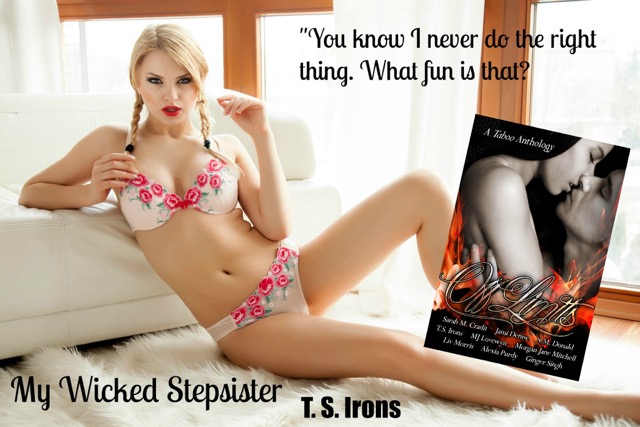 Holy Hotness!! Does T.S. Irons know how to write erotic scenes, YES! YES she does!! Liam and Drew’s families have always been close; the two grew up together along with Liam’s sister Alex. When Liam’s father dies in a plane crash, his mother marries Drew’s father making the three step-siblings. Unfortunately for Liam, he has always had a crush on Drew, but now there is no way they could be together. Sure, they aren’t blood relatives. But both families are very high profile and the tabloids would make it a scandal just to make sales. What to do, what to do? I’ll tell you what to do, READ THIS BOOK!! I give it 4.5 stars with 4 hands down the pants!


Sarah is the USA Today Bestselling Author of the Paranormal Southern Gothic series, The House of Crimson & Clover, born of her combined passion for New Orleans, family sagas, and the mysterious complexity of human nature. Her work has been described as rich, emotive, and highly dimensional.


An unabashed geek, Sarah enjoys studying subjects like the Plantagenet and Ptolemaic dynasties, and settling debates on provocative Tolkien topics such as why the Great Eagles are not Gandalf's personal taxi service. Passionate about travel, Sarah has visited over twenty countries collecting sparks of inspiration (though New Orleans is where her heart rests). She's a self-professed expert at crafting original songs to sing to her very patient pets, and a seasoned professional at finding ways to humiliate herself (bonus points if it happens in public). When at home in Oregon, her husband and best friend, James, is very kind about indulging her love of fast German cars and expensive lattes.
Connect with Sarah:
Website | Facebook | Google+ | Twitter


Jami Denise
Jami Denise is an up and coming writer from Southern California.
She writes Contemporary Romance, New Adult, and Erotica.
She has always had a strong desire to write. From a very young age, books became her escape. She loves the freedom to express herself through her stories and share them with others.
Her books are always on the spicy side with a little bit of sweet to make you swoon. Her feisty kittens always give the bad boys a run for their money. She likes taking risks, pushing her characters into directions that challenge the reader and take them out of their element. You'll usually find the unexpected to happen in her stories. Life isn't always pretty, and she likes to layer her words with true grit.
She is a self professed cat lady, addicted to coffee and Monster, cupcake lip balm, and loves all things old,grungy,and fast. She's well versed in sarcasm, and the F-word is her favorite adjective.
When she doesn't have her nose in a book, or fingers on a keyboard, she's spending time with family and friends, watching old movies, and waiting for the next felon to come sweep her off her feet.
She loves interacting with her readers and meeting new friends.
Connect with Jami:
Website | Facebook | Twitter
S.M. Donald
S. M. Donald is just an average girl. She could be your next door neighbor or a librarian. You'd never know in real life that she's got some pretty wicked fantasies!
T.S. Irons
Bestselling author T.S. Irons likes all things smutty! She loves lingerie, sexy movies and hot reads.
She lives in Pensylvania with her sexy husband and their crazy dog. Her published works include the Taboo Triology: Step-Dom, Sibling Rivalry, and My Wicked Stepsister.
Website | Facebook | Twitter | Amazon | Goodreads
Morgan Jane Mitchell
Bestselling erotic romance and paranormal author, Morgan Jane Mitchell spent years blogging politics and health trends before she rediscovered her love of writing fiction. Trading politicians for bloodsuckers of another kind, she's now the author of bestselling post-apocalyptic fantasy novel, Sanguis City. Her action packed series of vampires, witches, demons and zombies is paranormal romance, dystopia, urban fantasy and erotica in one bite. When Morgan Jane is not creating the city of blood or conjuring up other supernatural tales, she's dreaming up erotic and dark romances. Morgan Jane lives in the beautiful bluegrass area of central Kentucky with her husband, 3 sons, 3 cats and a greyhound shepherd mix dog named Miss Penni Lane. She also writes erotic romance as MJ Lovewyn.
Connect with Morgan:
Website | Website | Facebook | Personal Facebook |
Street Team | Twitter | Amazon | Goodreads | Newsletter


Liv Morris
USA Today bestselling author, Liv Morris, was raised in the Ozark Mountains of Missouri. She now resides on the rock known as St. Croix, USVI with her first and hopefully last husband. After relocating twelve times during his corporate career, she qualifies as a professional mover. Learning to bloom where she's planted, Liv brings her moving and life experience to her writing.
Website | Facebook | Newsletter | Email
Alexia Purdy
Alexia currently lives in Las Vegas, Nevada - Sin City! She loves to spend every free moment writing or playing with her four rambunctious kids. Writing has always been her dream and she has been writing ever since she can remember. She is the award-winning author of the Reign of Blood series and A Dark Faerie Tale Series.
Reign Of Blood Series Facebook | Twitter | Newsletter (Updates and Exclusive Giveaways)


Ginger Singh enjoys writing erotica that is strange, and different, and sometimes humorous. She has a good sense of humor and a desire to push the envelope. You never know what she might come out with next.
Hosted By