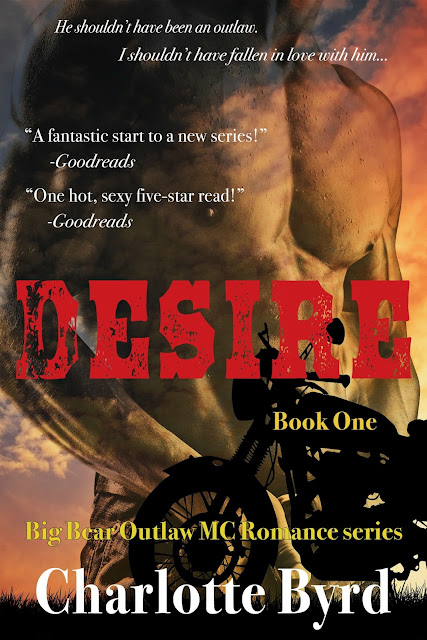 
Jack Hart was all wrong for me. He was in the Big Bear Outlaw Motorcycle Club. I was studying pre-med. He was a criminal, and I’ve never even jaywalked.

After my mom had left, the last thing I wanted was a relationship. But then I started falling for Jack. Why did he have to have a girlfriend? Why did I have to go out with his brother?

My family ran the MC, but there was so much more to me than the MC. I was a writer and I didn’t belong. The only person who saw this was Emma.

Why did I have to have a girlfriend? Why did she have to go out with my brother?

Desire is the first installment of a 3-part Big Bear Outlaw MC Romance series. It is a short read designed to be read in under an hour, and it ends with a cliffhanger. All three installments will come out a week apart. So you won’t have to wait long to read the rest of the story!

Emma’s mom left. Her dad is not dealing very well with the situation and Emma feels trapped by her life. Then along comes Jack Hart. Jack Hart was born into the Big Bear MC. He’s torn between following his family’s path of illegal activity and forging his own way. Will Emma and Jack be able to help each other or will everything turn into a huge cluster f%#&? Jack has a girlfriend and his brother Kyle has eyes for Emma. This is an interesting story with its fair share of drama. There were some things I found surprising and it had few sexy scenes. It’s a quick read and ends with a cliff-hanger that sent me diving into book 2.

Somewhere in the distance, I saw a flash of his long blonde hair.

He leaned back in a lounge chair laughing with his whole body. Loose strands of hair fell into his face as he rocked back and forth. He tucked them behind his ears, over and over, but they got untucked almost immediately. He was talking to a beautiful girl with long blonde hair and a snug crop top, the kind that I would never have the courage to wear.

“That’s Jack Hart,” Delilah leaned over and whispered in my ear. “Kyle’s brother.”

I nodded. I knew of him, but I didn’t know that he had a brother.

I had seen Jack at school, but I didn’t know how I felt about him. He hung out with a completely different group of people than I did, and frankly I never thought much of any of them. Many were drops outs destined to bum around this town forever.

Many were druggies. Druggies scared me, I’d never tried a single drug – not even a joint – and a huge part of me was embarrassed over my inexperience. I played it off as something that I just didn’t do, but I was secretly afraid. I was afraid of trying anything that had the power to make me loose control.

Our eyes met across the parking lot. He spotted me and then took a double take as if he were wondering, is that really you? I didn’t know why, but for some reason I shrugged.

A beautiful blonde hung around his shoulders and kissed him on the neck. His eyes remained firmly on mine. Her kisses became intense, and her body started to move to the music pumping out of the boom box. She tried to get him to move his body along with hers, but he remained perfectly still, staring at me. Eventually, I looked away and turned back toward Carter, Delilah, and Danny. 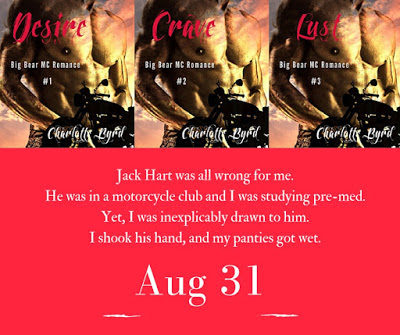 Author Bio
Contemporary new adult romance author Charlotte Byrd loves short reads and serials that are both steamy and energetic. She writes about hot motorcycle dudes and billionaires and the strong women who love them. She loves the feeling of falling in love and Happily Ever After. Charlotte Byrd used to live in Los Angeles, but now resides in a small Southern California desert with her patient husband and not-so-patient dog, Charlie.

Charlotte Byrd grew up on the East Coast and moved to Los Angeles to attend the University of Southern California. In no particular order, she loves chocolate, animals, nature, hiking and travel.