Through Smoke by Marissa Dobson

Through Smoke by Marissa Dobson

Monica Robinson moved to Texas in the hopes of adventure, little did she know she’d find danger in that mix. Firefighter Smoke Wilson has never found a woman that could put up with his career or keep his attention long enough for him to try to balance the two. When circumstances throw Monica and Smoke together, can they conquer the past in order to make a future neither knew they wanted? 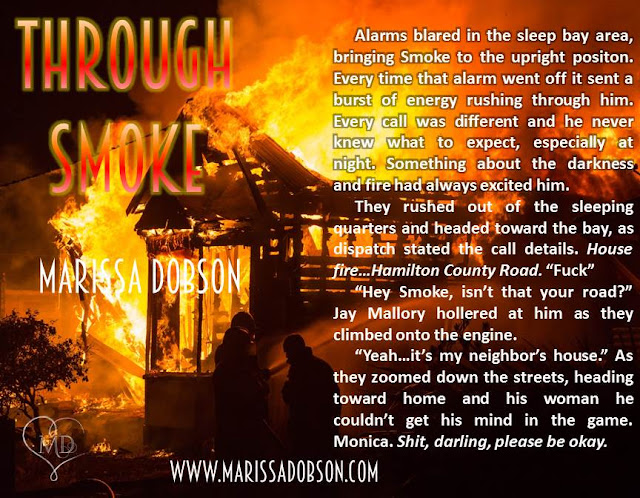 The door exploded inward and through the smoke firefighters emerged. “Monica!” Coughing she crawled toward them, the heat intensifying around her. Just a little further…fresh air… Someone hauled her into his arms, through the gear and face mask she couldn’t see who it was. “I got her.” It sounded like Smoke but the muffling from the face mask made it hard to hear him. “Paramedics are standing by.” The other firefighter said as she was carried out. “Wilson, get another line.” Wilson? Smoke are you here? “Go on, brother, I’ve got it.” The second firefighter who rescued her jogged toward the fire engine. “Let me down…” A coughing fit overcame her again and he raised her in his arms slightly. “I can walk.” “Not a chance, darling.” Ignoring her demands he headed toward the ambulance. Not caring who her rescuer had been before, she hadn’t bothered to look that closely, but now that she was out of the burning house and safe, she looked into his eyes. “Smoke.” “Shh darling, you’re safe now.” He eased her onto the gurney before he squatted down in front of her and took his breathing mask off. “Is this the woman you were talking to Fire about earlier?” “Shut up Sam and help her.” Smoke eyed the paramedic for a moment before returning his gaze to her. “Blaze is on his way and I’ll be back soon. I’ve got to help the guys get the fire under control.” “Go. I’m fine.” She put her hand up, stopping Sam from putting the oxygen mask over her face. “Thank you.” “I’d always come for you.” He kissed her forehead, rose, and headed back to the other firefighters battling the blaze. “My home…” She mumbled more to herself than anyone else as Sam placed the oxygen mask over her mouth. “Things can be replaced. What matters is that you’re alive. Now lie back and let me look at your hand. Are you burned anywhere else?” 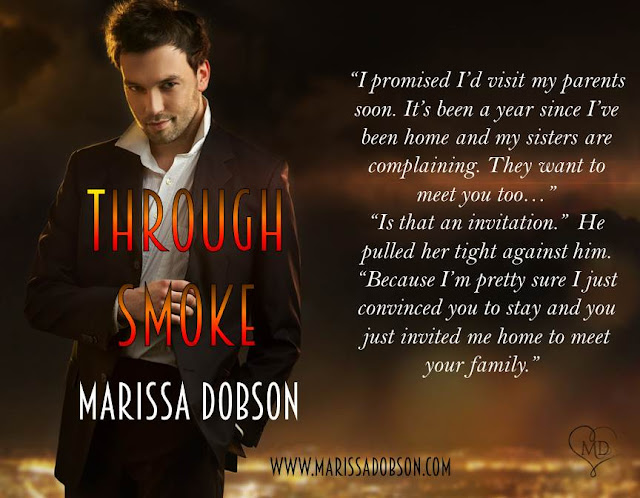 Born and raised in the Pittsburgh, Pennsylvania area, Marissa Dobson now resides about an hour from Washington, D.C. She’s a lady who likes to keep busy, and is always busy doing something. With two different college degrees, she believes you are never done learning.
Being the first daughter to an avid reader, this gave her the advantage of learning to read at a young age. Since learning to read she has always had her nose in a book. It wasn’t until she was a teenager that she started writing down the stories she came up with.
Marissa is blessed with a wonderful supportive husband, Thomas. He’s her other half and allows her to stay home and pursue her writing. He puts up with all her quirks and listens to her brainstorm in the middle of the night.
Her writing buddy Pup Cameron, a cocker spaniel, is always around to listen to her bounce ideas off him. He might not be able to answer, but they’re helpful in their own ways.