The One Release Day Blitz 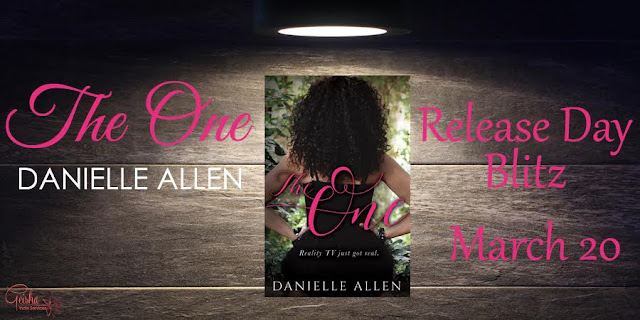 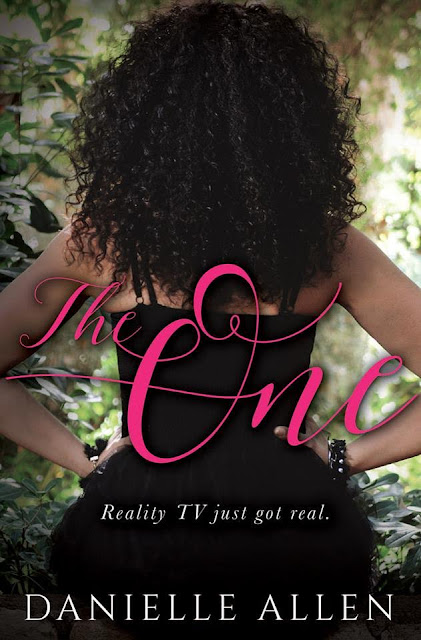 I don't generally watch reality television, but I definitely don't watch reality dating shows. Besides the fact that it's completely staged, it's a horrible depiction of people -- women especially.

Women are pitted against each other to compete for the affection of a man they "fall in love" with after a week or two.

It is complete crap.

So when my best friend, Koko, was hired as a makeup artist o the set of the most popular reality dating show, The One, I teased her mercilessly.

She told me that if I didn't stop teasing her, she would get me back.

Which is how I ended up as a contestant on The One.

Add it to your TBR Today!!! 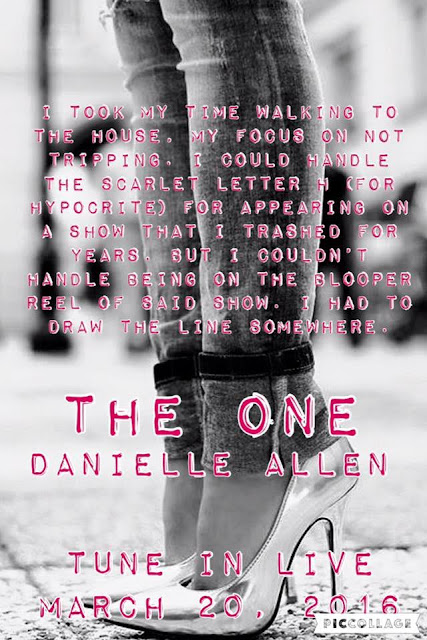 Wow, wow, wow! I will start by saying I love Danielle Allen's books. I haven't read them all, but the ones that I have read (Work Song and The Heartache Series) I have loved as much as I loved this one! Her stories are fresh and out of the ordinary when it comes to the storylines.

This story takes place in a reality TV setting like The Bachelor. Zoe's best friend Koko is hired to work as a make-up artist. Zoe finds reality TV shows distasteful and relentlessly teases Koko about it. In an attempt to get back at her, Koko enters Zoe as a contestant without her knowing. When she surprisingly is accepted, she decides to do it. Since she missed taking the Bar exam, uncertain what direction she wanted to go in law, she decides this might be something good to do in the interim.

"I'm going to go ahead and stop you right there," she interrupted, cutting me off mid-sentence. "We are not going to talk law right now. We are going to talk about you having the chance to bump uglies with Julian Winters. He is the --"

I frowned as I interjected, "The sheer fact that you said 'bump uglies' has disqualified you from giving me advice about anything in general, but sex specifically"....

The intricacies of the behind the scenes of a reality television show were quite mind-boggling. I will admit I never thought about it. The woman are catty, the producers devious and that made me all love Zoe even more. She wanted to stay above all of that.

Julian is quite the eligible bachelor and when he and Zoe meet, there is an immediate connection. But the stress of the show starts to take a toll on Zoe.

Add in some twists from the producers of the show, her having to watch Julian "date" the other woman, the stress of the show starts to take a toll on Zoe. I will say that many times during this book, I genuinely felt so bad for her.

Ms. Allen's plots are always different and unusual and her characters are strong woman who believe in themselves which always makes for a great book!! Her men are sexy, sophisticated and swoon-worthy! If you have not picked one of her books, I strongly advise any of her them, including The One. 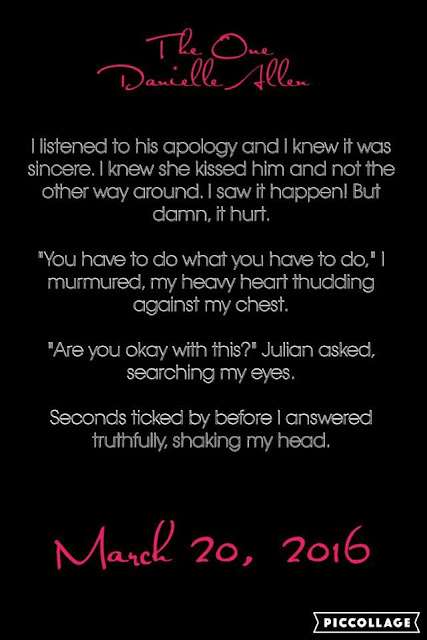 
“Ohhhh, yeah,” I remembered, familiarity of the case and the names flooding my brain. “’Sweet’. That case ended her music career, didn’t it? I loved that song. I vaguely remember that he was the one who wrote it, but they settled out of court, right?”

“Yes. But do you know what he looks like now?” My best friend inquired.

“No… I just remember being fascinated by the case because—”

“I’m going to go ahead and stop you right there,” she interrupted, cutting me off mid-sentence.

“We are not going to talk law right now. We are going to talk about you having the chance to bump uglies with Julian Winters. He is the—”

I frowned as I interjected, “The sheer fact that you said ‘bump uglies’ has disqualified you from giving me advice about anything in general, but sex specifically. You need to—”

A quick knock on the door followed by the sound of it being pushed open forced my sentence to end abruptly. 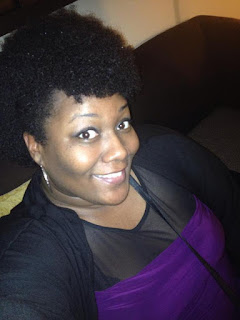 Danielle Allen is a lover of football, fashion, film and fiction. Married to the yin to her yang, Danielle spends most of her time with her husband, family and friends. From karaoke nights to vacationing and everything in between, she enjoys making the most out of the life in which she’s been blessed. Danielle spends her days teaching and event planning and her nights writing.

Danielle Allen is the author of the Back to Life Series (Back to Life, Back to Reality, Back to December*), Love Discovered in New York, Autumn & Summer, the Heartache Series (Heartache, Heartfelt, Heartless*) and Work Song.