Lipstick and Camouflage by Frances Stockton 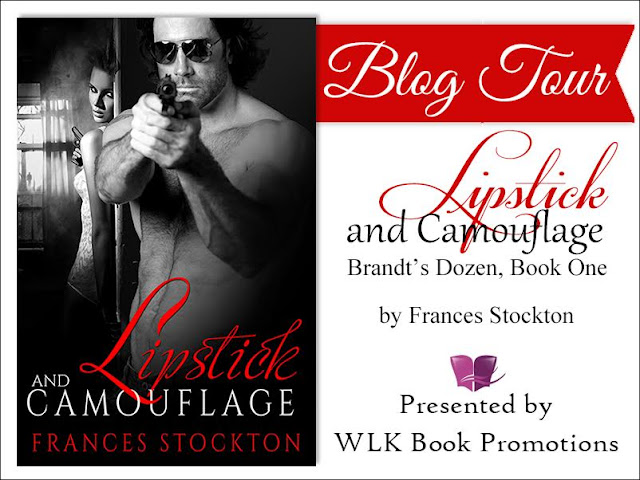 Lipstick and Camouflage
(Brandt’s Dozen, Book One)
by Frances Stockton

Security specialist Travis Blake’s undercover assignment should be easy. The former Navy SEAL has to protect Cassidy O'Neal from an elusive assassin. Yet, nothing about this case is simple.

For Cassidy, it’s easier to believe in ghosts than to think she’s in danger. Despite a series of unusual happenings around her apartment that make her feel uneasy, she has no idea her hot new neighbor is far more than he seems.

What starts off as simple flirtation quickly turns passionate. But, as danger intensifies, more than just their hearts are on the line. 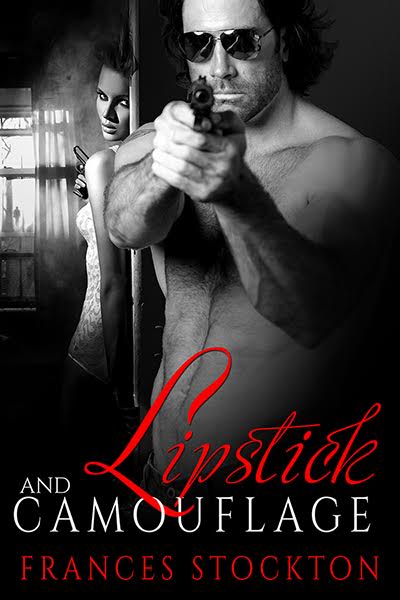 REVIEWS:
Meeting a hot really hot guy in her apartment laundry room isn't Cassidy's every day activity. She more into the mundane--like ghost hunting. She has no idea that meeting is going to be the beginning of the best and worst time in her life is. Travis is there undercover to protect her from a serial killer and so much more. Travis, ex SEAL, on his first case since being shot, has never let a client he was protecting get to him like Cassidy. Rescuing her from a stalled elevator starts their association off right away. It doesn't take long to feel guilty for hiding the truth from her but there is too much at stake including military secrets and threats. Figuring out the camouflage has noting to do with an undercover Travis. It isn't easy to figure out where it comes in. As the first in the series, although it is completely stand alone, the reader meets a number of guys from the security agency. Here's hoping we get their stories soon. As the relationship quickly progresses so does the escalation of threat to Cassidy and those around her. You'll hear from the bad guy's pov as well as the lovers. Enjoy and watch them try to balance their feelings and a fight the vicious actions of a deadly psychopath.
~Cheri

Lipstick and Camouflage is book 1 in Frances Stocktons Brandt's Dozen Series. Combining, suspense, mystery and romance.Security specialist Travis Blake’s undercover assignment should be easy. The former Navy SEAL has to protect Cassidy O'Neal from an elusive assassin. Yet, nothing about this case is simple. For Cassidy, it’s easier to believe in ghosts than to think she’s in danger. .Despite a series of unusual happenings around her apartment that make her feel uneasy, she has no idea her hot new neighbor is far more than he seems. What starts off as simple flirtation quickly turns passionate. But, as danger intensifies, more than just their hearts are on the line. Travis must do whatever it takes to protect Cassidy, including revealing who he really is. After initially reading the blurb my interest was piqued and I knew I had to read this book especially with romantic suspense being one of my favourite genres. After I started reading the story I was really enjoying it but then around half way through it just stopped working for me. I felt that once the romance was developed it took away from the original story and was page after page of "sexy time" which usually I don't mind but as I have said in my opinion it took over, I found myself skipping pages/chapters just to get back to the story. Unfortunately I won't be continuing with the series but wish the author well for the other books in the series.
~Vicki

Maybe Justin was the reason she was so jumpy lately. He’d not exactly left that night with a smile and she’d wondered if he’d come back and try again.

Or, maybe it was something else, something unexplained. Ever since she’d gone to Salem and took Mike Smith’s place as the lead cameraman in a ghost hunt, something had been off kilter about her apartment and the building itself. Granted, they’d caught some amazing EVPs that night, but the experienced investigators in her group, Jerome and Sam, concluded what they’d caught on audio was residual and non-threatening.

If it wasn’t Justin Myers or a ghost, maybe it was that surveyor who’d staked out the neighborhood. He’d claimed to be doing a favor for a friend looking to move into the area and open a new business. She hadn’t believed him. That man had an aura about him that was mysterious and dark, maybe dangerous. She’d run him off, and as far as she knew, he’d not returned.

Frustrated, she snapped her book closed and set it aside, going over to check the last load of laundry for the day. Being Friday, she’d worked a half day and had plans to do laundry, eat rocky road ice cream for dinner, and continue reading Edmond’s tale of revenge, justice, and romance until he skewed his best friend with a sword.

Okay, she’d read the book a couple of times. Next week, she’d open up The Three Musketeers and have four book boyfriends, though her personal favorite was Aramis.

Yeah, like anything that exciting would happen to her, but one could dream a tale of fiction even if her day job wasn’t exactly the same as a French sailor’s false imprisonment or Musketeers saving a king from a treacherous cardinal.

Taking a moment to switch up her music, she chose her classic rock playlist and increased the volume, singing, well, mostly humming until her favorite line, “We were making it,” came out loud and clear.

As if it mattered how badly she was singing while pulling bras and panties out of the dryer and tossing them into the hip-hugging basket on the floor beneath the machine.

Slamming the dryer door home and picking up her basket, she turned to go back to where she’d been sitting when movement caught her eye. Whipping around, she saw a tall, impressively built man standing in the doorway, as if he’d stepped right out of the pages of one of her novels.

A heartbeat later, he came toward her, proving he was no figment of her active imagination and seeming to get bigger with every step. Unsure what to do, Cassidy threw her basket at him and rushed for the door, getting less than two feet before her bare foot caught his boot and she went tumbling.

My love for storytelling began in kindergarten when I created my first fictional characters. Though I’d given them simple nicknames, I’d convinced my family that Red Henry and Green Henry were identical twin brothers in my elementary school.

They were mischievous, rarely did their homework, had trouble with math and spelling, experienced heartbreaking losses, and yes, they even had girlfriends!

It wasn’t until the Henry twins mysteriously moved to a different state that my family realized that they were entirely fictitious and my mother suggested I write the stories down.

A few years later, I began to write, completing my first manuscript at age thirteen. I confess the heroine was a cross between Nancy Drew and a contemporary Laura Ingalls Wilder, who happened to be dating one of the Hardy Boys. But when I’d written ‘the end’ on the very last page, I’d known I had more stories to tell. Of course life intervened, but whether I was in high school, becoming part of a local theater and dance company, working as a Veterinary Technician, earning a degree in History and Secondary Education, or teaching, I was always writing and reading romances.

Finally, I met and married the love of my life and moved from Maryland to Massachusetts in 2001. Shortly after, I proudly joined Romance Writers of America and the New England Chapter, and I’ve been writing faithfully ever since.