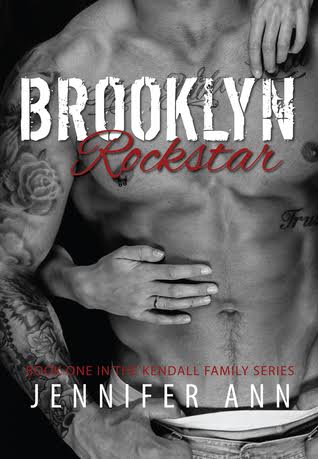 Sexy bad boy Charlie Walker had everything he could ever want as a rockstar: a platinum album, a cushioned bank account, and an endless supply of groupies desperate to have him. But things changed when the band's drummer went missing, forcing Charlie to go it alone and question if he truly has what it takes to succeed in the business. Small-town girl Evelyn Kendall has just arrived in Brooklyn Heights. With a new job and her best friend as a roommate, she's ready for an epic adventure free from her family’s constant supervision. She's not prepared for the muscle-bound, tattooed star who appears out of nowhere and rocks her world. When Charlie locks gazes with the freckled brunette at his first solo gig, he falls hard and fast for reasons he can’t explain. Determined to keep Evelyn in his life, he’s ready to change his ways, even if they run blood deep. But will their instant attraction be enough to weather the storm brought on by the perils of fame, Charlie’s secrets, and Evelyn’s overly protective brothers? Warning: This book is filled with sexy bad boys and strong leading ladies. If you’re looking for an engaging read with panty-melting love scenes, then you’ve come to the right place. Praise for Brooklyn Rockstar: "A beautiful story with HOT sex scenes and characters you just can't help but fall in love with!" "[Charlie Walker] checks all the right boxes. Rock star looks, personality, body, tattoos...yep, he's got them covered." "Jennifer Ann gave me all I could want in a sexy, bad boy rocker with way too much of most things." "This book was extremely well written - from the chemistry, to the secrets that Charlie holds. Add to that a nice line of suspense, a line that will encompass much of the story as well as bring light to many of the readers' questions, and the book was a page-turner and one I didn't want to put down." "Charlie Walker is a freakin rock god. Holy crap was that man sex on a stick." 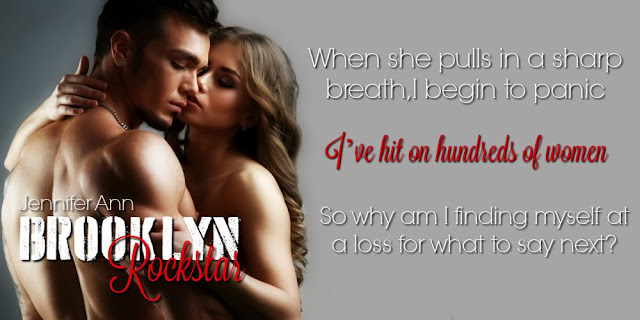 Every single fucking time I sneak a look at the sexy brunette with intense eyebrows, my dick stirs inside my jeans, begging for permission to play. I do my best to ignore it, instead using the energy to make this my best performance. Yet I can’t shake the intense moment when our eyes met. With that one heated look, she completely unmanned me. Beneath those curved, dark eyebrows are the most alluring honey colored eyes that make me want to tangle my fingers in her long dark hair and break one of my most coveted rules of not kissing groupies. What in the hell am I doing? Women are nothing more to me than a casual good time. Something to keep me busy and satiate my needs. Beyond that, they’re not worth any serious kind of investment. Danny always said that we didn’t need chicks getting dragged into our crazy shit and messing with our heads. So what is it about this one—who is so far from my normal type it’s like she’s in a different zip code—that made me want something more than a casual fuck? For starters, she’s not dressed desperate like 99% of the others, and she bobs her head along to the beat like concerts are her thing. Like it comes natural and she doesn’t give a shit about putting on a show to impress anyone. And she makes the reporter I invited look fake as shit. Damn it, I shouldn’t have made that Gwen chick think she’d be getting a private show after the interview. Unlike the groupies that come after me, the brunette seems genuine in every way. Braided hair, collection of dark freckles that spill from her little nose down onto her cheeks, she’s fucking cute. Both her eyelashes and tits appear to be the real deal. Most of all I appreciate the fact that she isn’t falling all over herself for a chance to touch me like everyone else by the stage. For a heart- stopping moment I wonder if she’s into women the way she’s touchy-feely with the chick on her other side. With every glance, I find myself fantasizing in different ways. I want to fist her dark, silky hair. I want to kiss every last one of her freckles. I want to cup her tits beneath her shirt that make a sweet curve beneath her top. I want to make her come with my mouth and find out what her voice sounds like as she cries my name. But above everything, I want to run my tongue over every inch of her sun-kissed skin and sink my teeth into her ripe bottom lip. Jesus, Walker. Focus. Though the crowd continues yelling like crazy, I could play the theme song from Law & Order and they’d probably still lose their fucking minds. How am I supposed to gauge my talent as a solo artist on a crowd driven by hormones? Stacking the audience with women was one of Lorenzo’s least brilliant ideas. I nearly bust a gut laughing when I catch him cozying up off stage to a set of blonde twins that could work for Hooters. The guy is more driven by pussy than I’ve ever been, which is saying a lot. I catch the brunette’s interested gaze a second time when my set’s nearly over. Her pouting lips part slightly with a silent sigh and she stops moving as I watch her. Those big brown eyes fill me with the kind of warmth I haven’t felt since I was a kid that got off on campfires and hot cocoa instead of women. When I imagine her lips all over my skin, sliding up and down my cock, it throbs painfully and I lose my place in the song. The brunette’s body jerks and she snickers inside her hands. She laughed at me. Goddamn she’s really something special.

Jennifer Ann is the pen name used by Jen Naumann when writing steamy romance novels with complex love stories. Like her characters, she's in love with the city of New York and can often be found either there or at concerts, rocking with the best of them. On the rare occasions she realizes she's no longer a spring chicken, you can catch her driving a tractor alongside her husband in southern Minnesota while trying to keep up with the madness of their four active children. Jennifer also writes YA paranormal under Jen Naumann.