The Reaper's Sacrifice
by Abigail Baker 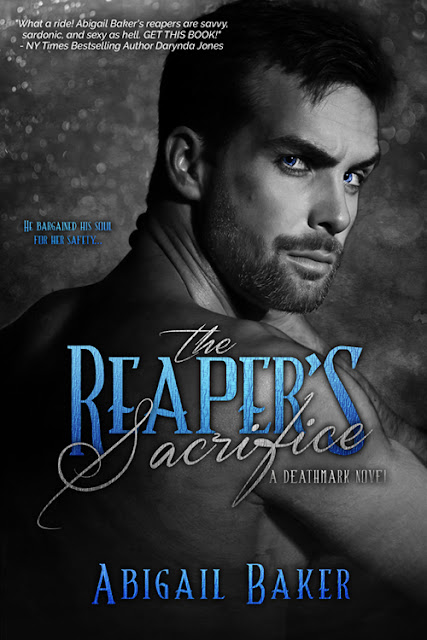 It’s been two years since I tried to overthrow Death...

Now, all I have to show for it is a life in exile without my lover and personal Grim Reaper, Brent Hume. He bargained his soul for my safety. If I could get him back, I would, but I don't don't have the first idea how. So I live for the night when Reaper’s bring nightmares to the living—and Brent visits me in mine. Doesn’t make for a good night’s sleep, but I’ll take what little of him I can get.

When Death comes calling, sending me into an old foe’s camp as a spy, my inner rebel awakens once more. If I play my cards right, I might improve upon my growing Master Scrivener powers and finally free Brent so that we can be together for good. I know he’ll do anything to keep me safe—even if it means I’ll never see him again. And that scares the Hell out of me.

I started to drift off, and then I felt him watching me. Ollie, he said in that old world Kentucky drawl. Ollie, hear me?
“Brent?” Within this dream, I sat rail straight in the plastic lawn chair as crickets chirped nearby. He’d never been able to speak directly to me in the dreams before. My eyes welled with tears on hearing him again. But the dark presence I had come to know as Brent was nowhere. He had never failed to show himself in my dreams since we’d parted. And I was still asleep, right? From one side of the yard to the other, I searched. Nothing. “Brent, where are you?”
Ollie… His voice was closer, but he wasn’t there. I miss you. His voice broke.
My eyes watered. Immediately tears poured rivers down my cheeks. It didn’t take much to make me cry these days. But this…his voice, the anguish in just three little words, was enough to crack me wide open. “I miss you, too. Where are you? Are you here? In Montana?” Please, please, be here, Brent.
He grew silent, but was near. I waited for the entire world to grow still in anticipation of his reply.
What do you miss most? he asked.
Somehow I laughed at the question, which felt too common and boring for this method of interaction. I rubbed my eyes in the vain hope he’d appear before me as the Kentuckian backwoods lumberjack that I loved. “I miss the way you feel against me. I haven’t forgotten.”
How could I forget? Electricity had buzzed between us. Little sparks jumped from my body to his when we were close. That was not a feeling that could ever be forgotten. And it was one of the rare things that kept me going. I had to believe I would feel this again one day, and I would lose myself in it for eternity.
“What do you miss about me?” I asked.
If I listed everything, then you’d laugh at me. If I told you I missed everything, darlin’, right down to those freckles on your cheeks, would that be enough? Too much? Invisible fingers, icy, as death should be, fluttered across my forehead. There was nothing there for me to see. Brent was so close but still millions of light years away.
I’m trying to bring change, he said, moving from anguish to business. But it’s not happening fast enough. I’ll need your help soon. Are you ready?
“Just tell me what you need.”
Soon. His presence, usually dark and ominous, grew faint. He didn’t feel as powerful as he once had, and that terrified me. Nonetheless, I’d rather have him near, even if for only this moment. I wanted to grab ahold of him, dig my fingers into the flesh around his wrists, and pull him straight through the dream wall between us. I wanted to but…I Couldn’t.
“Will I ever get to see you again?” I had to know the answer, and I held onto the question and my hope like a vise, like I was holding onto him alone.
You’re being set up. Don’t trust them…
“Brent, what do you—”
Don’t trust them, Ollie.
“Who?!”
Coldness trickled like rainwater down my shoulders and spine.
They’re coming for you. They’re here.

Book One:  The Reaper's Kiss 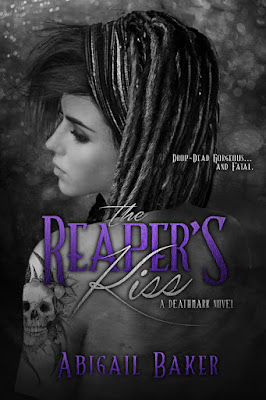 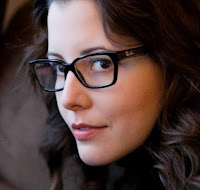 Abigail Baker shares her home with a Siamese cat endearingly named “The Other Cat” and two rescued mutts with mundane human names that people think are cute. In addition to writing about rebellious heroines, she enjoys hiking, discovering craft beers, baking the perfect vanilla bean cupcake, and rock climbing (going as far as scaling 800 vertical feet to the summit of Devil’s Tower National Monument in 2013).

Abigail won first place in the Rocky Mountain Fiction Writer’s 2010 Colorado Gold Writing Contest for Romance for THE BLOODSUCKER and first place in RWA’s Golden Network’s 2011 Golden Pen in Paranormal Romance for TATTOO OF YOUR NAME ACROSS MY SOUL (now THE REAPER’S KISS, Deathmark Book One). She regularly blogs about life observances, lives at the base of the Rocky Mountains, and can be easily found hiking any of Colorado’s best trails.