She nearly ruined his life. Now she needs him to save hers.

It was supposed to be a simple job for hacker Bliss Bennett: access confidential files and turn them over to the CIA. But something went wrong—and now Bliss has a target on her back. With no idea who to trust, she heads straight toward the one man she hopes won’t turn her away.

Sky “Hacker” Kelley is a badass Special Operator with lethal moves and mad computer skills. He hasn’t seen his former lover—former wife—in four years, not since she nearly cost him his military career. Her arrival on his doorstep in the middle of the night reveals a gut-deep truth—he might want nothing to do with her, but he still wants her. And as much as he’d love to slam the door in her face, Sky isn’t wired to turn away anyone in distress.

Protecting Bliss won’t be easy. The files she stole are at the heart of a dangerous conspiracy, and someone is willing to do whatever it takes—including kill—to get them back. It’ll take all Sky’s considerable black-ops skills to keep Bliss safe—and all his willpower to resist falling into her bed, and her life, ever again… 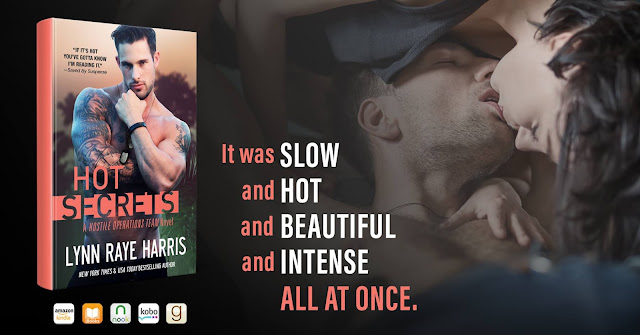 Bliss worked for our country. She was a hacker with a shady past who hired out free-lance to some of the "three initial" agencies and made a very healthy living. Until her last mission came with someone out to kill her. Who could she trust to help her?

Sky was on the Hostile Operations Team, lucky to even be in the military after a leader turned out to be a traitor that none of his men knew let alone this elite team. His leader had been discovered and turned in by a gorgeous woman who used Sky to out him. The same woman he'd loved. Married. Lied to him. He'd divorced. The same woman who faced him at his door four years later.

Could he turn her away? She trusted him to protect her and help her. The problem, even after all she'd done, he still wanted her. His body didn't care what she'd done. He couldn't turn her away, he'd just have to fight his desire.

When he brought his team in they all learned her incompleted mission was much more serious than they'd thought. Hot was now involved and not just because of Bliss. They had to find the answer and the bad guy. Would she be alive by the time they did? Would Sky and Bliss find what brought them together four years ago?

I have read most of the Hot series and enjoyed every one. This lets us visit some of the team, gives us a taste of their professionalism, military style, and special team closeness of the men and their women. Hot Secrets easily stands alone, I will warn you that its likely to make you want more Hot!

This book was amazing, it had you guessing who was behind it all. And kept me on my toes. Lynn Raye Harris did amazing job on this book. She makes you love all her characters.I loved Sky, he is loyal, hard headed and hard working. He does everything to erase his past, but still has problems with trust and forgiveness.I loved Bliss, she is confident, sassy and intelligent. She loves doing what she does, but she has one regret.I highly recommend this book. I can't wait for more.

New York Times and USA Today bestselling author Lynn Raye Harris burst onto the scene when she won a writing contest held by Harlequin. A former finalist for the Romance Writers of America's Golden Heart Award and the National Readers Choice Award, Lynn lives in Alabama with her handsome former military husband and two crazy cats. Lynn writes about hot military heroes, sizzling international billionaires, and the women who dare to tame them. Her books have been called "exceptional and emotional," "intense," and "sizzling." To date, Lynn's books have sold over 2 million copies worldwide.