All I Need by Kathryn Shay

He's a fire chief who curses out the mayor at every turn. She's the mayor who needs him in a crisis.
He's a line firefighter attracted to the mayor's daughter. She's a woman who wants nothing to do with a man like him.
Chief Chase Talbot has butted heads with Mayor Vanessa Jordan since she was elected to office two years ago. And since he's the head of the fire department, she's his boss. Still, he takes no grief from her. But after a fire involving her parents, Vanessa turns to Chase for help. When the situation calms down, both are unable to get their relationship back to what it was. Throw in troubled teens, estrangement from family, a possible arson and you get a complex, gripping plotline and an emotional and scintillating love story.
Interweaved with Chase and Vanessa's lives is Joe Santori, the young, brash and immature firefighter of book one. Now Joe is a wiser, more settled lieutenant running his own crew. When Holly Michaels, a fourth grade teacher, and the mayor's daughter, moves into the condo next to his, she intrigues him. But Holly doesn't want to get involved: Joe is worldly, gorgeous and way out of her league. The problem is, he doesn't think so. These young people go on a rollercoaster ride of emotional highs and lows, but even after they give into their passion, the old Joe resurfaces and Holly's having none of it.
It comes as a shock to both couples that contrary to what each thought, they don't have all they need!

Cameo appearances of readers' favorite firefighters from Hidden Cove, as well as Shay's trademark tense and nail-biting rescue scenes, sizzling sexual encounters, and emotions exploding on every page, this book will pull you in and not let go until the characters find their way back to each other.
If you haven't read the first four books of The Rockford Fire Department, be sure to grab FEEL THE HEAT, RISKING IT ALL, CODE OF HONOR and NEVER FAR AWAY, all intense firefighter romance books. 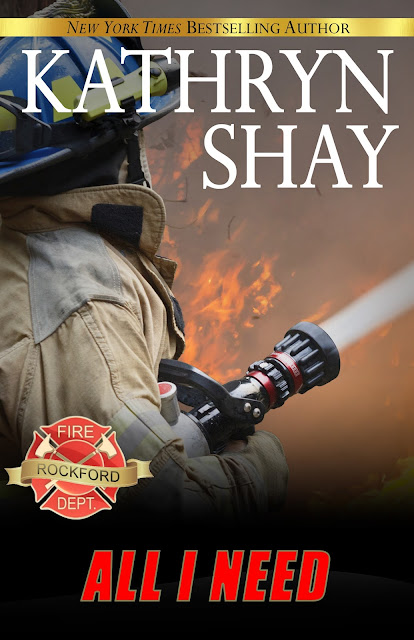 I enjoyed the storyline and setting. Two couples overcome much to eventually be together. The Fire Chief has issues with the new Mayor. He stands up for his crews, she has the townspeople and taxes on her mind. Can they come to terms? He's a southern gentleman and when a tragedy happens will he let this upbringing overcome his professional differences? Vanessa made a big mistake and has paid dearly. Is there a way to overcome the consequences?I enjoyed the older characters finding love. Still, for those who prefer a younger couple, the author has provided that as well. The Mayor's estranged daughter is helped by one of the chief's best men, leading to an attraction. Still, they are younger and have serious trust issues from previous relationships.Joe and Holly tend to give up on each other too quickly for me, however, they do find a way back to each other. On the path to that relationship, old wounds are healed and families reunited. Always a good read.Again the storyline was engaging, however, with the POV of all four characters and traveling from the past to the present it tended to be a little choppy for my taste.Reviewed for Words Turn Me On

A NEW YORK TIMES and USA TODAY bestselling author, Kathryn Shay has been a lifelong writer and teacher. She has written dozens of self-published original romance titles, print books with the Berkley Publishing Group and Harlequin Enterprises, and mainstream women’s fiction with Bold Strokes Books. She has won five RT Book Reviews awards, four Golden Quills, four Holt Medallions, the Bookseller’s Best Award, Foreword Magazine’s Book of the Year, and several “Starred Reviews.” Her novels have been serialized in COSMOPOLITAN magazine and featured in USA TODAY, THE WALL STREET JOURNAL, and PEOPLE magazine. There are over seven million copies of her books in print, along with three million downloaded online. Reviewers have called her work “emotional and heart-wrenching.”