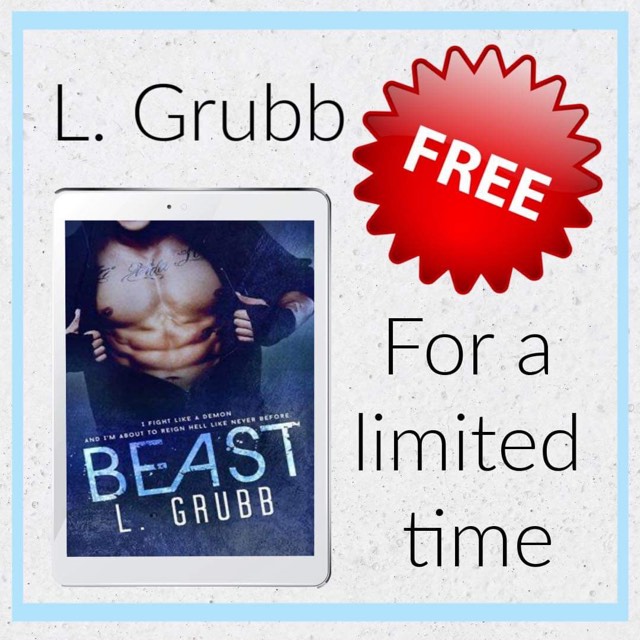 It’s ALMOST Christmas!! So L. Grubb has put BEAST
#FREE for the holidays – Grab a copy while it’s still FREE. This is a limited time deal!

5 ***** ‘I read Beast in one sitting and absolutely freaking loved it! There was not ONE thing that I didn't like about this.’ – Laura Smith

‘This book was most definitely a 5 star read and I would rate it more if I could! I cannot wait for Roofie's story next in this series and from the looks of this book, I'm hoping it goes the way I think!’ – Emma Johnston

Blurb:
I’m a man no one fucks with.
I’m a man all the bitches want.
I’m also the world champion of MMA…Mafia style.
I don’t get my name from winning, I get my name for my size. I am a BEAST, I’m also the one your father’s warn you little girls about.
BEAST
Beast has had his life set for him for an early age, he was pushed into training to fight the world’s best. His father had his eyes on the dollar signs while he forced his son into the brutal world of MMA. He was trained hard, and he became the best. But the bosses have changed the rules and the rules are about to fuck him over. He will bring hell down onto the MMA circuit and he will become top man. But will he gain the power he deserves? Or is everything he’s worked so hard for been for nothing?
Carlotta is a fierce woman whose life hasn’t been quite straight cut. But she leads her path in the right direction, sort of. When the opportunity arises to make extra money to fund her passion, she takes it.
She trains. She fights. She wins.
Meeting Beast was an unpleasant experience, and her dislike for his egocentric and arrogant behaviour rubs her the wrong way, but her curiosity is piqued and she can’t remove him from her mind. Will their one night of passion lead to anything? Or will being in the MMA lifestyle tear them apart before they get started?
Who will win the ultimate battle of hatred and anger? Will they fight for their passion or will it come crumbling down around them with severe consequences?